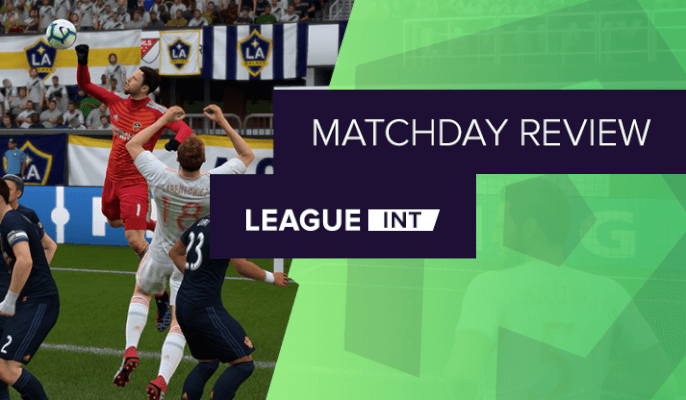 Welcome to this weeks PL INT review. We are slowly but surely reaching the closing stages of the season. This week we will feature the biggest game of the season and mid table teams that had a brilliant week.

Xzibit make it five in a row

The past two weeks were crucial for Xzibit's chances to challenge for a higher position. To be fair two of those five games were default wins against Paramount FC and The Rising Phoenix but the other three games were hard fought wins. They managed to beat the Vikings 3:1 to the surprise of most. Of course their match against Ukraine was a high scoring game, as is every Ukraine game. Xzibit managed to beat them 4:3 away from home! A strong performance finishes a 1:0 victory in favour of Xzibit. Thanks to Symphony receiving a penalty Xzibit moved to the 10th position.

Fusion had a lot of catch up to play due to wildcards. So this week they had to play four games. They sadly only gained three points out of those four games but it always seemed like something small was missing for them to win the games. They lost the other three games always by one goal. Reborn managed to beat Fusion 3:2, Xzibit 1:0 and Venom beat Fusion with a 3:2 as well. The only points they were able to gain was in the game against Lex Artis, they won said game 4:2. After this horrible week for Fusion they will have to keep an eye on their opponents. Ragnarök FC, Unshackled and Provocateurs caught up to Fusion.

Venom unlikely candidates for the championship

After another loss to Ragnarök and a draw to Unshackled, Venom's title chances seem to fade further away. This miss step could be the final blow to their championship hopes. Their main focus now will be the Champions & Europa League qualification. The beginning of the season looked strong for Venom. They could stick to the top four and stay in contention for the title. Venom are currently two points ahead of Revival but they have four games in hand. The champions League qualification should be doable for Venom as they have a big gap to the next team that is eligible for CL & EL. We will see what the next three weeks hold for Venom.

Danney rises high above Venom's Ronan to score his second of the game. This goal made sure that the Venom goal was merely a consolation.

Due to wildcard usage, Unshackled had 3 games to play this week. After losing against Provocateurs and Revival with the identical 3-1 scoreline, the veteran team was starting to lose their footing within the chasing pack. With Fusion and Ragnarök facing big teams this match week, it was crucial that Unshackled performed to highest standards in order to avoid slipping further away from the European place hunt. First up were Venom who provided a strong challenge and were arguably favourites beforehand. UNS-Bale's 45th minute strike was cancelled out in the 79th minute by Venom’s Giraldo. A good result considering Venom’s spot in the league. Up next were league minnows Lex Artis. A 90th minute goal by TwisterBcn completed the 5 goal rout for Unshackled. This result combined with a default win over Symphony ended a very successful week for the veterans. With huge games against spot rivals Ragnarök and Fusion, it could become very possible that Unshackled fuel a late push for the European places.

Revival come from behind to win in the title race

After a late start, the biggest game of the season finally kicked off. Revival faced Legacy at home for the second game of the season. In their first meet up this season, the game ended in a draw. This time Legacy had a better start to the game, they headed into the halftime break with a 2:1 lead. Revival showed character and caught up with a clinical finish from Keukenrolle in the 65th minute. They managed to go ahead with a goal from Stefan in the 84th minute and sealed the win in the 92nd minute with a goal from Panda.

Revival’s Stefan scores the go ahead goal for the 3:2 lead versus Legacy and embraces his teammates.