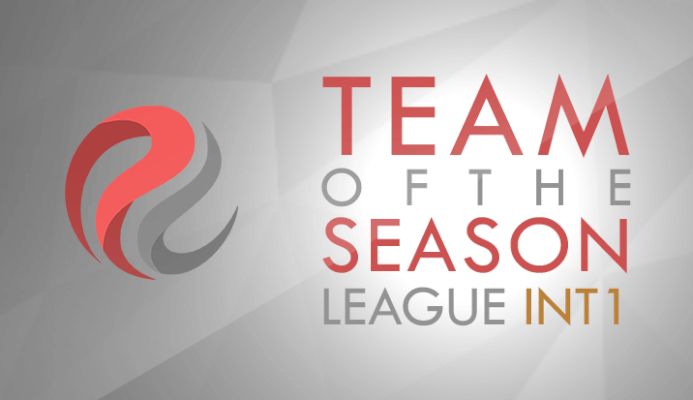 Hello and welcome to the Pro League International season review & presentation of the Team of the Season S18!

First of all we want to thank every player and team that participated as well as everyone who followed the PL INT. This is our first season as admins and we learned a lot in the past season. We hope to improve the league further and keep you up to date on what is happening with this league. Before you read this please keep in mind, this first part is my opinion. Let’s get started with:

Xzibit Gaming took over after the first two weeks as the portuguese team Maritimo had to drop out. They started into the season with three losses but then slowly but surely found their footing in the league with a win over Fusion and a draw to the champions Revival. Xzibit never had it easy in the league, They were one of the few teams who needed extra transfers to finish the season with enough players. At the start of the second half they started to win games, to climb the standings a couple spots. They finished in 10th and i think it would have been closer towards the bottom if some teams wouldn't have dropped out.

The surprise team of the season! Ragnarök actually started into the season with four losses in their first four games. They just had to get used to playing in a competitive league. They flipped the switch after that four game loss and started on a five game winning streak. They managed to beat Venom twice this season and Revival one time. They kinda lacked a top tier stand out striker, they had Danney and Murphy who lead the team in scorer points but are only at 14 and 10 points. Which puts Danney into the top 19 for top scorer points. They had the best Goalkeeper of the league in their team with Zooroo! He managed to get nine clean sheets in 21 games! I’m really looking forward to this team in the next season as i expect them to improve even more and without that bad start to the season they could have seriously challenged for a top 4 spot! A team to watch next season!

Fusion showed up this season with strong performances against some of the bigger teams of the season! It will be interesting to see if they can make the jump to a “big” team next season. They have the potential to do so! Fusion kind of have the same problem as Ragnarök. They are missing a top tier striker or they haven’t figured out how to get Dex (their top scorer) to go off and score a lot of goals. It will be interesting to see if Fusion can get their attack to score more next season, it would give the defence some more breathing room.

Legacy’s cup run ended fairly early, in round 2 against FIFA Allstars. That had to be disappointing for the reining cup winners, who obviously hoped to win the cup again this season! Their season started well, the only losses in the first part of the season were against Venom, Reborn and Ukraine, they drew against Revival 1:1. Sadly they couldn’t finish the season as strong as they wanted. They got 2nd place with an 8 point gap to Revival. The gap to 3rd place is 9 points. They finished in a comfortable second place. Legacy got the best out of their top striker Doelpunten again who finished second in the top scorer point list. Only three points short on Revivals Stefan. The gap behind Doelpunten was filled by Dolan who got 20 scorer points himself! They will try to improve over the break to try and challenge Revival next season! 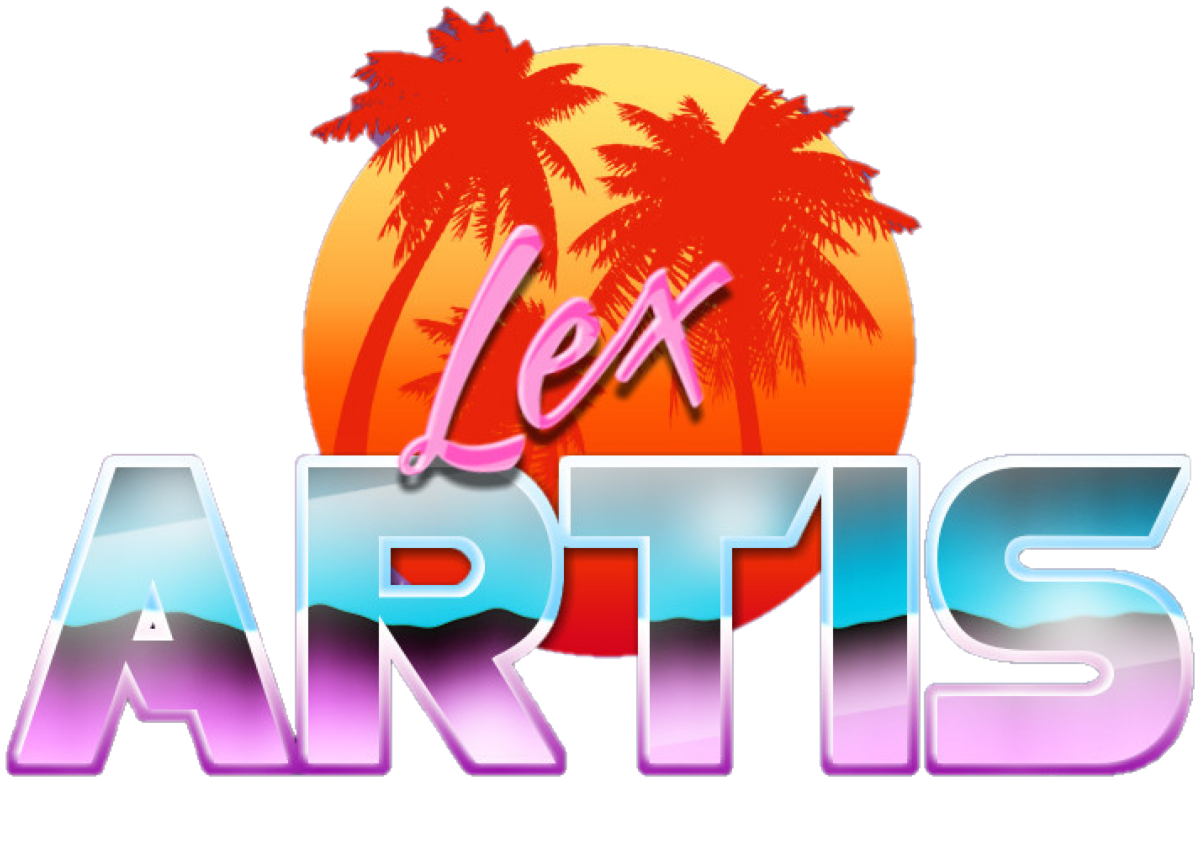 Lex Artis learned a lot about competitive play and squad management this season. They finished in 12th, LA will try to improve a lot over the break and they will try to build a strong core for the next season. Their biggest weakness was the always changing squad and a lack of players. We will keep an eye on this team to find out how much they changed over the break.

This team sadly dropped out because of a lack of players.

I expected this team to fall short against some of our newer teams but Provocateurs proved themselves with a strong 5th place ! Provocateurs had three attackers who finished with +15 scorer points. They will hope to hold on onto their three attackers and maybe improve in the attack even more to make a run for top 4 next season. This team is unpredictable, it will be interesting to see where they finish next season!

Reborn surprised me, especially their two Strikers Griezmann and Ipswich, both finished with

I was spot on with my prediction. Revival were the team to beat this season. They dominated every statistic (except GK, Sinner and MVP). Revival finished with a record of 22-2-2 and a goal difference of 71. Revival had the top scorer with Stefan as well as the 4th and 5th in the scorer leaderboard this season. Very important to point out is their outstanding defense. Three of their Center backs finished with 10-12 clean sheet as well as their CDM Grecio. That on its own is a statement how dominant Revival where in every part of the game. It will be interesting to see how they can improve next season and if other teams can challenge them more compared to this year! They lost in the semi final to the cup winners Boyz N the Hood.

Symphony got banned midway through the season for extensive use of unregistered players.

The Rising Phoenix dropped out of the League.

Ukraine were the most entertaining team in the league. The amount of late drama in and goal festivals in their games was amazing to watch. Ukraine relied on their attack to fix the mistakes in defense. The Attackers Jediaeris and EdenHazarD did a good job, they obviously can’t carry the load for the whole team the whole season. This team will also be interesting to see if they can improve over the break.

It would be rude to call our Veterans of the league a disappointment but Unshackled didn’t perform up to standard. They struggled a lot with their players, they were a part of the group of teams that needed extra transfers. You could partly blame the summer season for this. Unshackled relied heavily on their attacker Marko. He finished with 20 scorer points. They will have to work on improving their attack next season otherwise they will be in the same situation as this season.

Venom scrambled towards 4th place at the end of the season. They looked pretty strong in the first half of the season with a victory over Legacy. They had a good attacking duo up top with Azz and Trempale who finished with 23 and 18 scorer points. Venom will go through a rebuilding phase in the break as they lost both their top attackers from last season. I’m pretty sure they can recover from that loss as they still have a strong core. Their cup run ended very early compared to last season, they lost in the 2nd round versus the german team Pro Gloria et Patria. It will be interesting to find out how good they look next season. 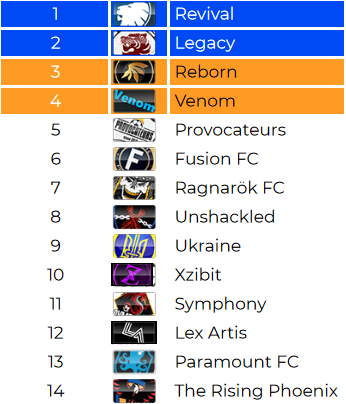 We start this seasons Team of the season off with the Goalkeeper. This was probably a surprise to all of us. I predicted one thing right tho! I predicted that a Revival GK can only be in the TOTS if they play him the whole season, this didn’t happen, which means instead of a Revival GK we have the GK from Ragnarök FC in our TOTS! Zooroo was the backbone of a surprisingly good ragnarök FC team. He kept 9 clean sheets in S18! 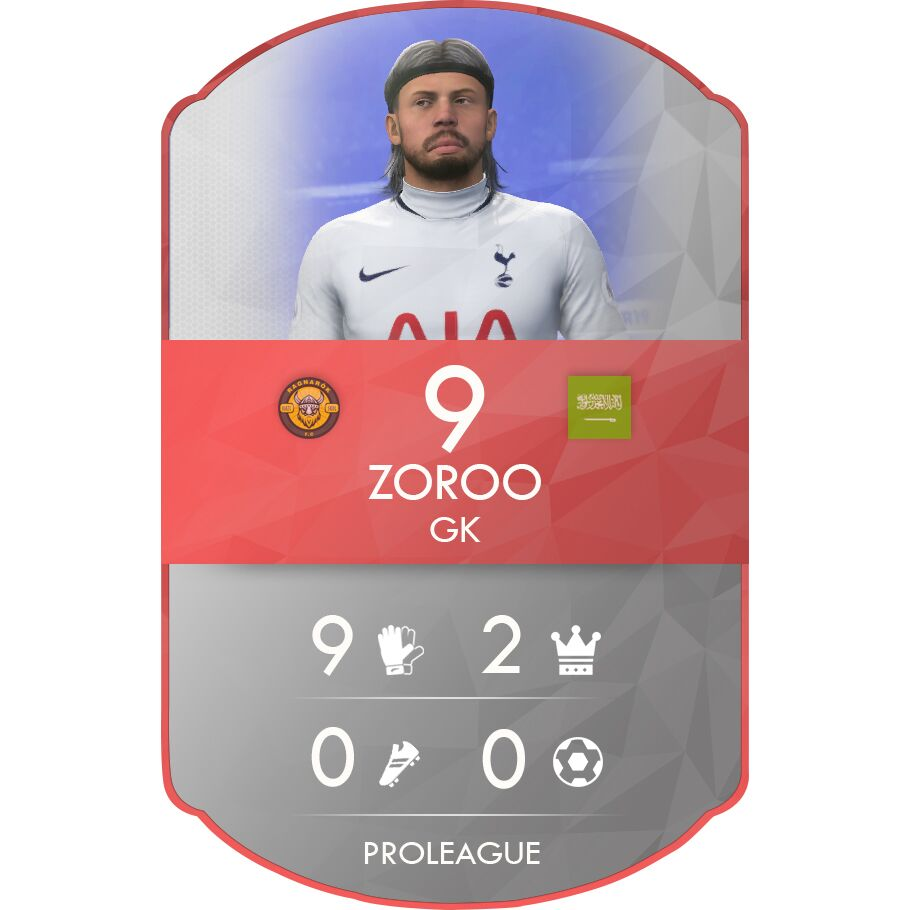 Since the 3-5-2 is the most used formation this season in the PL INT we decided to go with a 3-5-2 in the TOTS. This leaves us with three CBs we can pick! We start off with the most impressive CB this season Revival’s Baker. He finished the season with 12 clean sheets, 7 scorer points and 1 MOTM. The other two CBs next to Baker are Btrain from Ragnarök with 9 clean sheets and Uqt92 aka Yuri from Revival. He finished with 10 clean sheets, 4 scorer points and 1 MOTM. 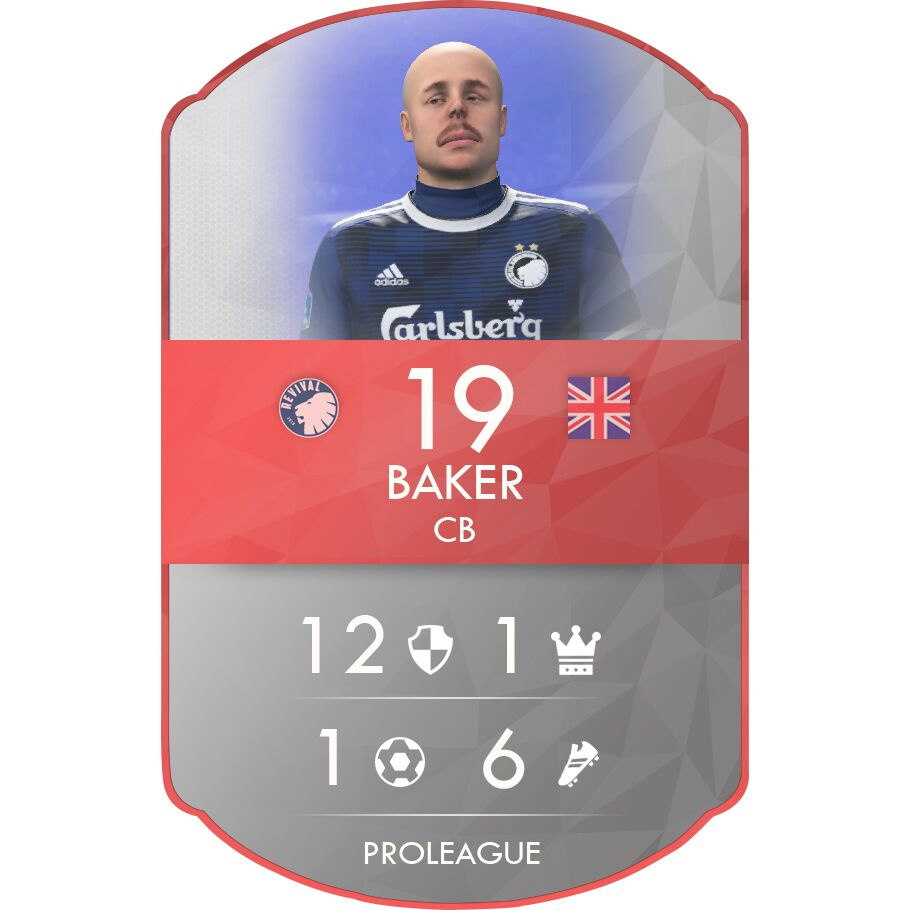 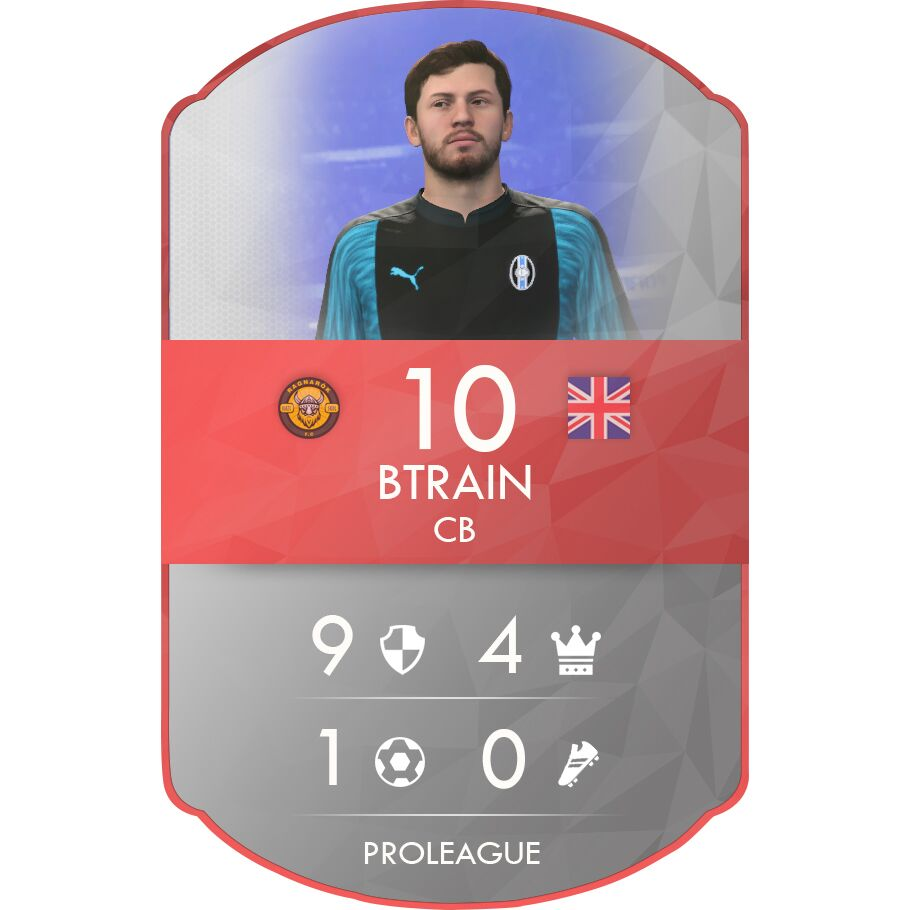 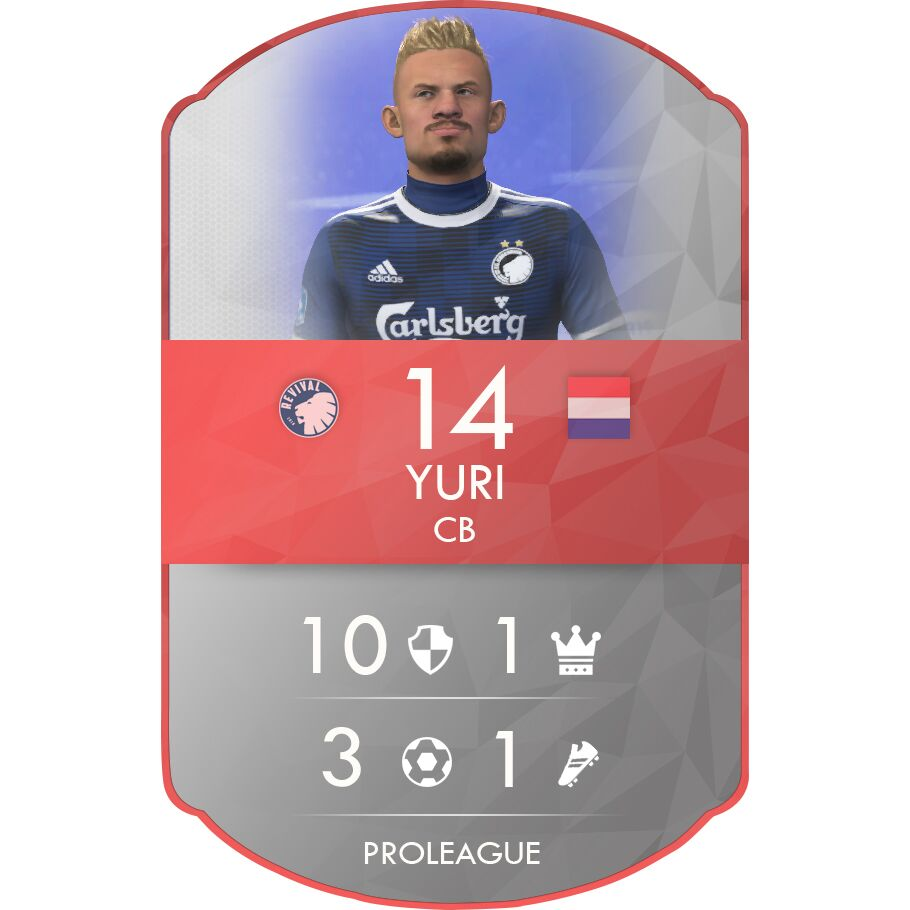 The 3-5-2 has two CDMs but we changed it to CMs. Our winners in this position are Grecio and Bassem. Grecio is one of Revivals CDMs and stood out this season with his defensive work. He gathered 11 clean sheets, 3 scorer points and 2 MOTMs. Bassem is Legacy's midfield engine, he collected 9 clean sheets, 11 scorer points and 1 MOTM. 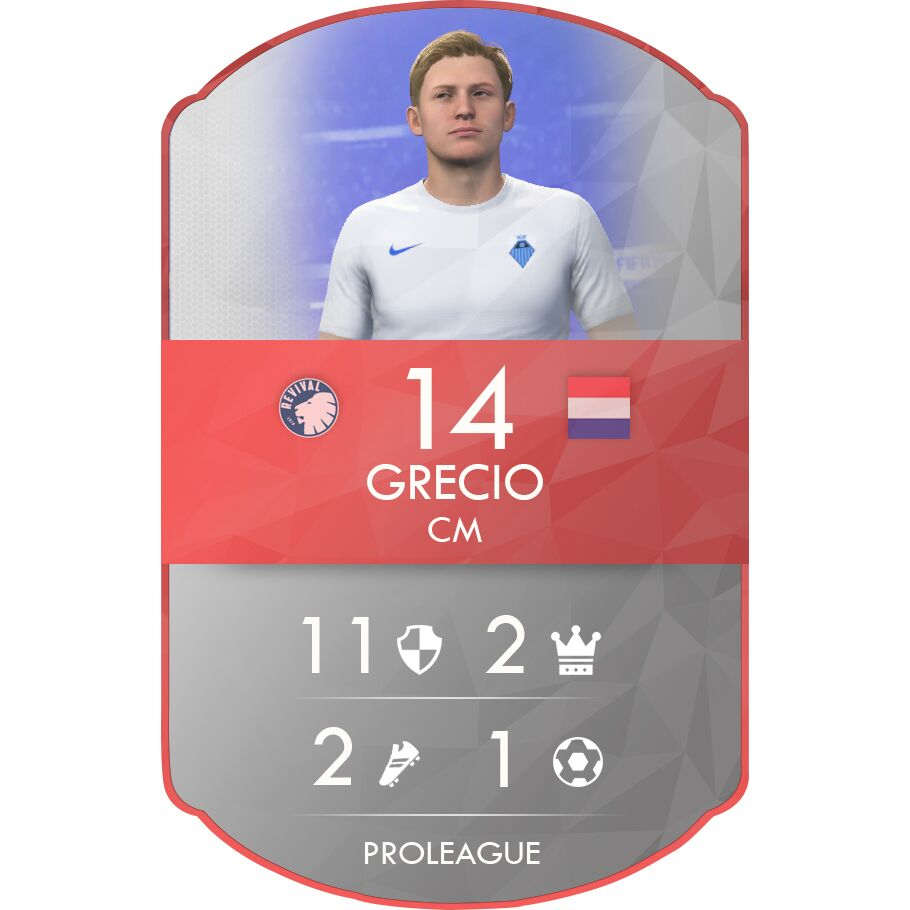 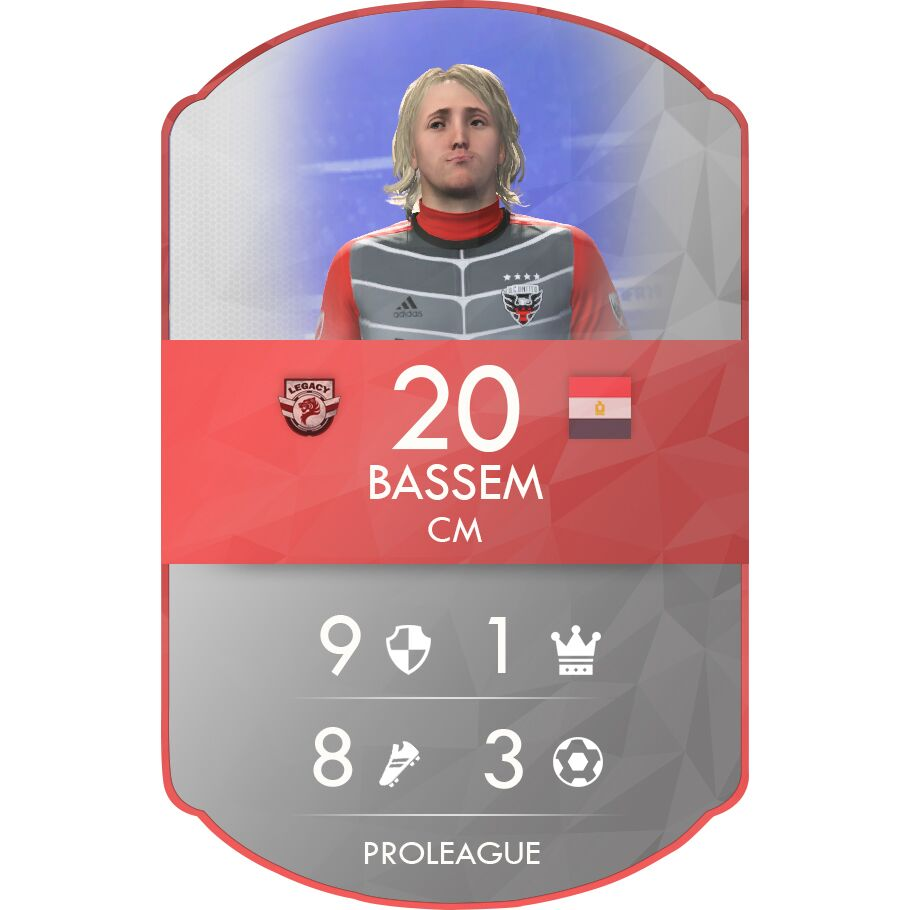 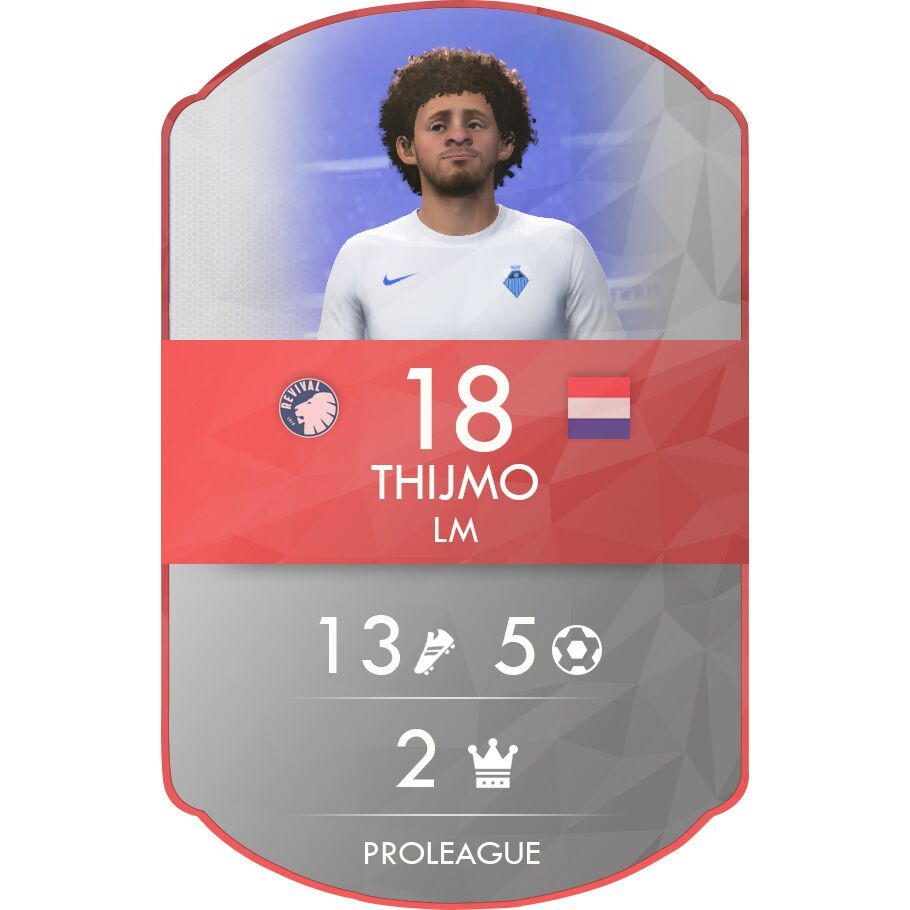 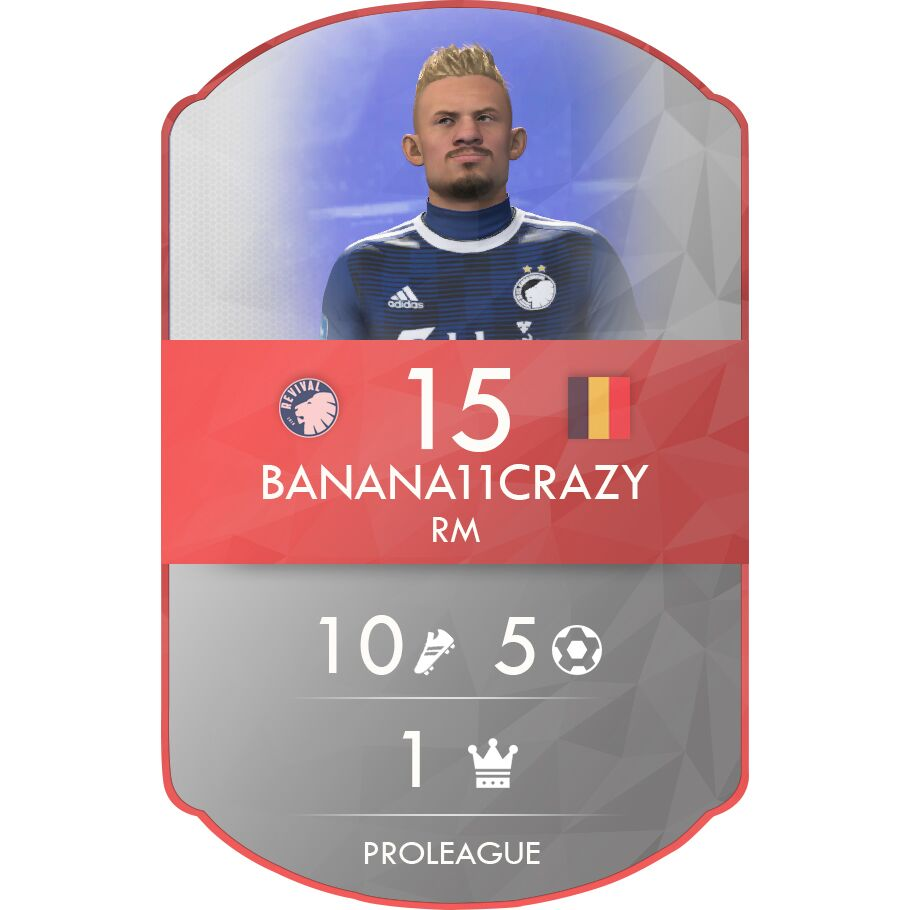 There was 1 guy who dominated this position last season! He outscored some of the star strikers from other teams. His name is Keukenrolle aka Dementrox, he is playing in Revival and finished the season with 17 assists, 7 goals and 0 MOTMs. 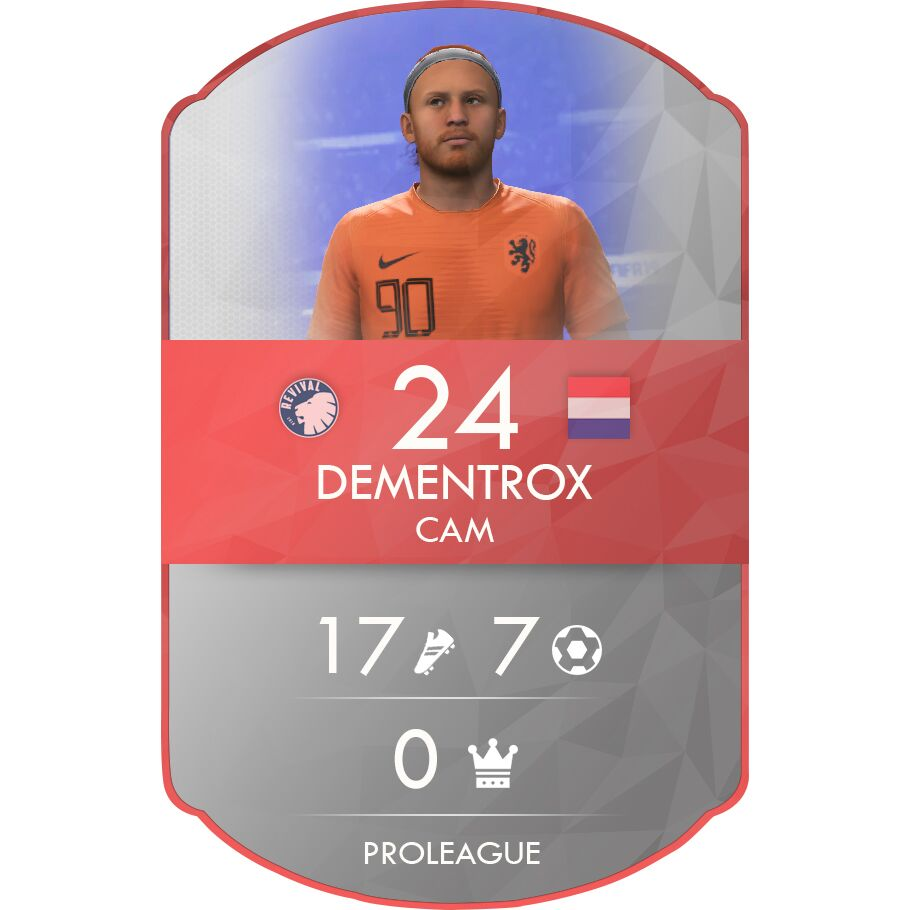 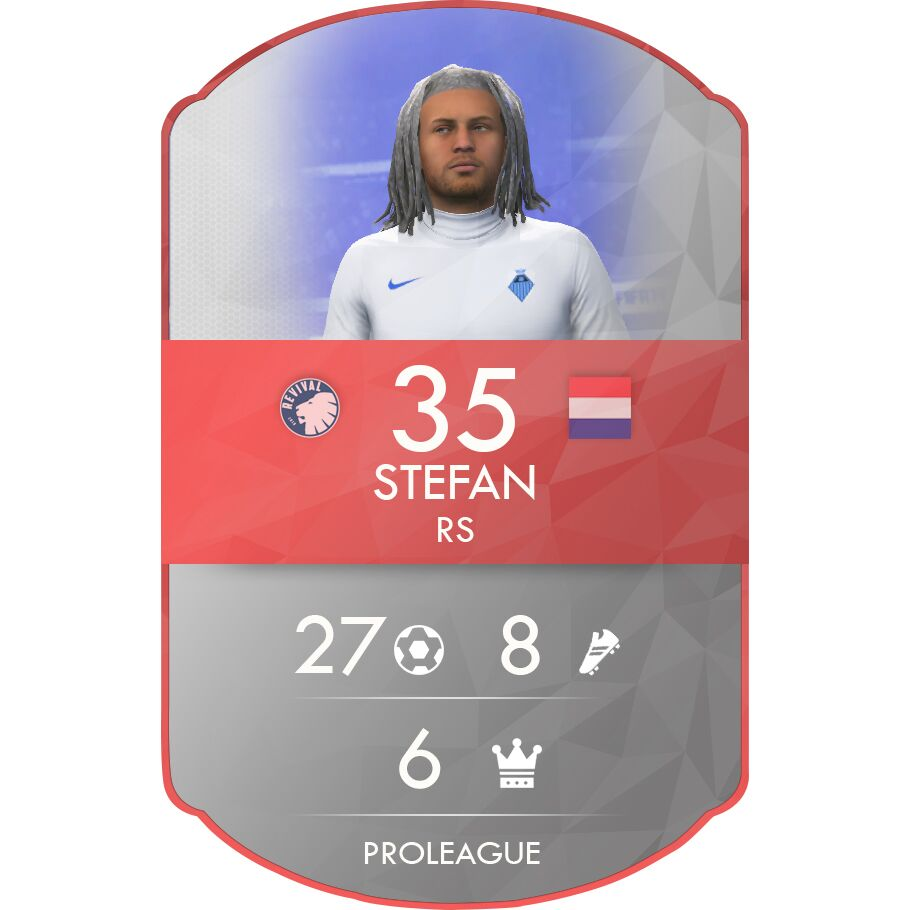 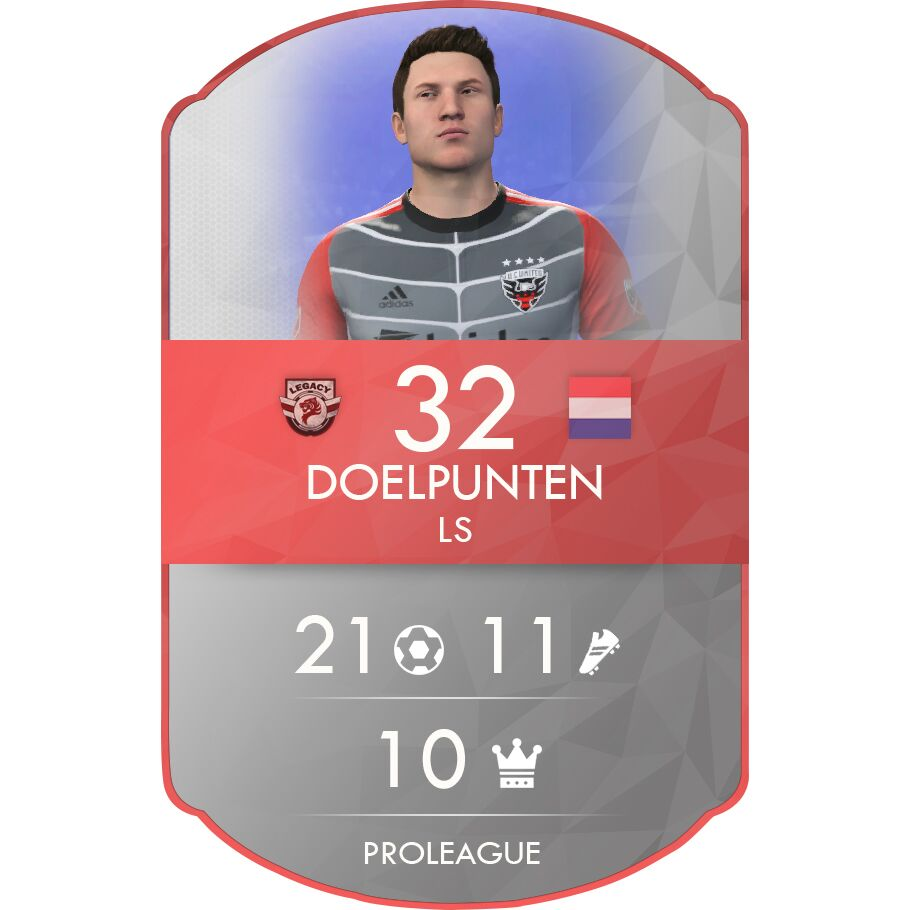 Here is a full overview of this seasons TOTS! 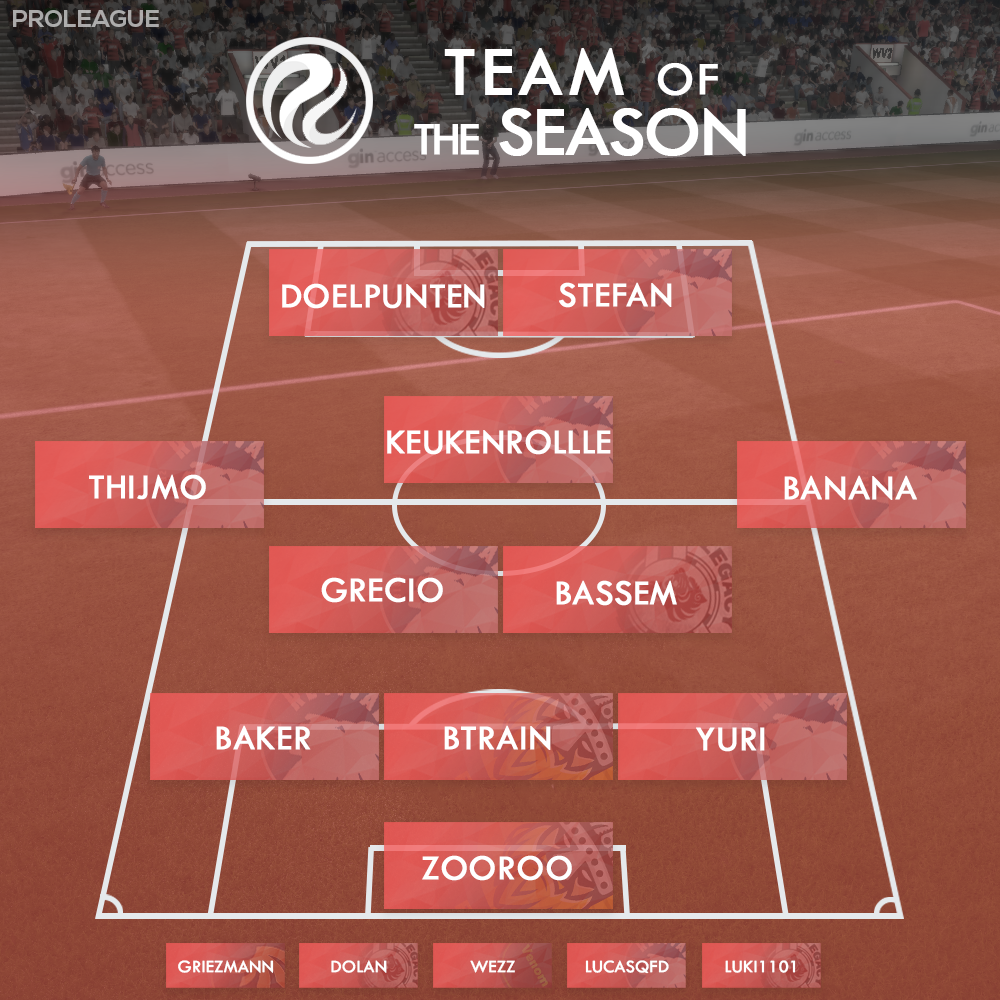 Fitzo 02.10.2019 um 10:47
Thanks a lot to the teams and especially to the new admin team. They did a great job increasing the general interest in the int league and will continue it hopefully in fifa 20 as well.